Films opening this week include THE TOURIST, THE KING''S SPEECH and THE TEMPEST. 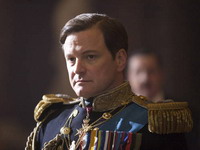 Crowned King George VI of England and a.k.a. Bertie (Colin Firth), Bertie has found royalty a pain owing to his inability to deliver speeches, forcing him to work with Australian speed therapist, Lionel (Geoffrey Rush).

An abrasive but beneficial initial encounter forces the two to work together, forming an unlikely bond of friendship and unbreakable bond that also helps Bertie overcome his stammer. David Seidler’s script comes complete with choice quotes and dialogue perfect for interaction of the two leads.  As the title of the film implies, the speech is the centre of the story, neither one of each of the characters.  Hooper keeps his story on track.  Hooper remembers that it is the little details, like the tear in the wife’s (Helena Bonham Carter) eye after a crucial speech that make a good film like the diction that makes a good speech delivery.

And what a splendid period film this is, aided by Oscar worthy performances by both Rush and Firth.

American born director Julie Taymore, known more for her British works like ACROSS THE UNIVERSE and the other Shakespeare’s TITUS, returns to the Bard’s work with a female rendering of THE TEMPEST.

The story of THE TEMPEST needs no recall.  But the gist involves a usurped Duke (Duchess in this film adaptation) creating a storm to exact a revenge on her brother.  The brother and entourage are shipwrecked on Prospera’s (Helen Mirren) island with daughter Miranda (Felicity Jones) falling for Prince Ferdinand (Reeve Carney).  In this version of THE TEMPEST, the male lead character Prospero is transformed to a female Prospera.  Taymore, who penned the script takes a few acceptable liberties with the play but keeps its integrity.

The recent filmed version of the Stratford’s stage production of THE TEMPEST with Christopher Plummer demands comparison.  In contrast Mirren’s very articulated role where one can distinguish her almost every syllable, Plummer’s ramblings provide a different effect.  Both command presence and are excellent in the lead roles and it is good to experience different interpretations work.  But the famous line: “We are such stuff dreams are made of, and our life is rounded by a sleep”, is more effectively uttered by Plummer.

Taymore’s TEMPEST is more feminine.  Besides the lead being female, the female cast stands out.  For instance, of the lover’s scenes, Miranda stands out more than Ferdinand.

A filmed version of THE TEMPEST in this day and age allows CGI effects to be incorporated to the play. Though the sets and scenes look stunning, most of the CGI are a distraction and not a necessity.  The multi appearance of spirit Ariel (Ben Wishaw) is a case in point.  Taymore’s TEMPEST is also more sensual.  Ariel is always fully nude (the camera quick to hide the private parts) and the lovers looks humanly perfect.  The one scene with Trinculo (Russell Brand) hiding under the garment of Caliban (Djimon Hounsou) is strangely homoerotic.

For all the minor flaws, Taymore’s THE TEMPEST still holds its own.  Stunning and beautifully performed, this new interpretation/adaptation of Shakespeare’s play should not disappoint!

THE TOURIST plays like other films in this genre KNIGHT AND DAY or MR AND MRS SMITH, but at less than half the speed.  Directed by German director of THE LIVE OF OTHERS Florian Henckel von Donnersmarck, his film moves like a typical slow German movie.  (To me, the Germans made the slowest paced films next to the Swiss and Greeks).

But all will be forgivable if Florian Henckel von Donnersmarck’s film offer other pleasurable distractions.  For one, the film is slick and polished with a lot of the hits (killings) executed with finesse and precision.  THE TOURIST also boasts Johnny Depp and Angelina Jolie as leads.  Like Tom Cruise and Cameron Diaz in KNIGHT AND DAY, the star power pays off.  Jolie and Depp make a believable romantic comedy and they command star presence, though particularly when they are alone than together.

The plot involves the international police, mainly Scotland Yard led by Paul Bettany seeking a multi million tax evader.  They do not know what he looks like but believe that Jolie will bring him out.  So they tail her.  She meets up with Depp to pass him off as the prey.  The story is a bit like Alfred Hitchcock’s NORTH BY NORTHWEST with Cary Grant’s mistaken identity of Richard Thornhill.

But alas!  Florian Henckel von Donnersmarck’s film is not even close to the Hitchcock classic (in actuality my BEST movie of all time). What the audience gets is one scene set up after another, barely connected in any narrative form.  Though executed with class, the lack of suspense is evident.  Boredom eventually sets it.  The sexy and classy Jolie character is nicely contrasted with Depp’s sullen math teacher.  The film contains a nice twist in the plot (not revealed in this review), but still cannot excite the audience from what is generally a poorly storyboarded narrative.

For all the talent assembled in this French-American co-production, the only thing that stands out is the French scenery.  THE TOURIST is a film that should never have left home.