The Big Christmas movies begin making their rounds with THE FIGHTER and Disney’s TRON LEGACY. 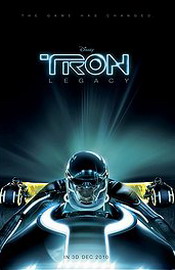 THE FIGHTER is a boxing family drama high on the family drama with authentic boxing scenes choreographed from the actual fights.  The film is based on the biography of professional boxer Micky Ward (Mark Wahlberg) and his older half-brother trainer Dicky (Christian Bale).

Directed by Russell who has proven his mettle in family conflicts like I HEART HUCKABEES, FLORTING WITH DISASTER and male angst in SPANKING THE MONKEY, THE FIGHTER was a project originally offered to Martin Scorcese (RAGING BULL).  But director Russell succeeds well offering the film a different look than RAGING BULL.  Here the family drama and personal conflicts rise above the boxing.  He shows what it is like to come to loggerheads with the family, and a crazy family at that.  The segment in which the mother (Melissa Leo) and the sisters show up in a car to beat up Micky’s girlfriend (Amy Adams playing her as sexy bitch) is the film’s most charged up scene.  Russell shows how all these problems affect Micky’s performance in the ring.

Shot in Lowell, Massachusetts where the real Micky trained, THE FIGHTER cannot be faulted for authentic locations and sets.  Russell tightens the film in the second half but the film never fails to lose momentum.  Whether in terms of drama or boxing action, Russell’s film delivers. The pacing is excellent with the climatic fight at the end more exciting than any of the fiction ROCKY films.  Russell’s fluid camera movement is also evident from the film’s start with the camera lens gliding on the streets of Lowell.

As far as performances go, Wahlberg carries his boxer role well.  But it is the stand-out performances of the supporting cast of Melissa Leo as Micky’s over-supportive mother Alice and Christian Bale as the edgy, cocaine addicted ex-boxer that demand mention.  Bale would surely be a winner of this year’s Oscar for Best Supporting Actor or at least a fighting contender.  Bale worked hard for his role capturing the real Dick’s mannerisms and the distinct Boston accent.

THE FIGHTER might not be too much feel good, but as far as entertainment goes, THE FIGHTER gets my vote as one of the best films to see during the holiday season.

HOW DO YOU KNOW is a romantic comedy centered on a love triangle between professional softball player Lisa Jorgenson (Reese Witherspoon), a corporate executive (Paul Rudd) and a major-league pitcher (Owen Wilson) for the Washington Nationals.  Slight but nevertheless entertaining, this is much less drama than Brooks’ famous break through film, TERMS OF ENDEARMENT.

The poster shows a picture of the 4 main stars.  No surprise, as the film pays enough attention to each of the four leads.  Witherspoon, Nicholson, Wilson and Rudd’s salaries combined with Brooks led to the film’s total budget reaching over $100 million.  This is not to mention the other important talent in the film including music composer Hans Zimmer (Oscar winning composer for THE LAST EMPEROR) and Polish cinematographer Janusz Kaminski (twice Oscar winner for SCHINDLER’S LIST and SAVING PRIVATE RYAN).

The main lead character is softball professional Lisa.  Her main problem is her inability to articulate her problems with the result of her date meeting with a corporate guy with a company crisis, George (Rudd).  George is a nice guy.  The trouble with the script is that from their very first meeting, the audience can guess for sure that George is the one that Lisa eventually settles down with.  So, when all the obstacles begin to occur, the audience’s patience get a little tested.  The sub-plots are interesting enough, one involving George’s dad Charles (Jack Nicholson) who ants George to go to prison for him to save his career.  Nicholson is excellent in this role and one only wishes he has more screen time in the film.  He steals all the scenes for everyone else, especially when he starts mouthing those 4 letter words.

Performances are good all around as is with the music and cinematography.  The filmmakers get hat they pay for.

HOW DO YOU KNOW works well as a feel good film for the festive season.  How do you know?  There are also sufficient laugh-out loud segments in the film.

Spanish director Carlos Saura is more known for his dance films such as CARMEN, FLAMENCO and TANGO.  This latest entry is a non dance feature though one where dance (or opera) has a larger influence.  The film is more interesting to see how a director fares working in a different medium.

I, DON GIOVANNI is a drama – the story of libertine Da Ponte (Lorenzo Balducci) as he affects the creation of Mozart’s (Lino Guanciale as Mozart) famous opera on Don Juan, Don Giovanni under the auspices of the Casanova (Tobias Moretti).  To those unfamiliar with the story, a little reading p will aid understanding the film.

Saura’s best segment is at the film’s start with a splendid scene with the stone statue of the Commendatore, the man Giovanni kills as the former tries to defend his daughter’s honour, hauled on a gondola in the dead of night, avenging right arm raised. Casanova, in a passing vessel, rises and salutes as the gondola passes.

Saura’s film is stunning in terms of sets, scenery and costumes.  The operatic performances are top-notch but his all the good looks fail to evoke the audience’s emotions.  The acting is mostly cardboard like with most of the actors employed more for their good looks than anything else.  They are not allowed much freedom or screen time to make a point.

At least in the Saura dance movies when narrative becomes difficult, one can sit back and enjoy the choreography ignoring the rest.  I, DON GIOVANNI is all beautiful to look at, with nothing much else to affect the audience.  No one cares about Da Ponte, his mistress, Casanova, Mozart or anyone else.

The images of the American Santa Claus bringing gifts to happy children and who eats milk and cookies are to be dispelled with in this Finnish take of Santa.  At the film’s start, the images of Santa’s footprints in the snow and a scrawny Santa by his cauldron depict a different holiday presence – one that tears up naughty children, bones and all.

In the depths of the Korvatunturi Mountains, 586 metres deep lies+ a monstrous frozen Santa, excavated by an American mining company.  This is witnessed by young Pietari who discovers then that the children around the village are strangely disappearing.  Apparently, he figures that they are being kidnapped for the monstrous Santa.  This idea he gets from reading old Finnish folklore.  Of course, his father, a reindeer butcher does not believe him till the entire herd of the seasonal reindeer is discovered mutilated by some monster.  As the story goes, father and son save the day in this blacker than black comedy set in the north where the sun seldom shines.

For s small budget film, director Helander’s film looks stunning with great production values.  The sight of the bottomless shaft is both scary and awesome.  He knows how to work his characters into the story.  The kid is a timid one, afraid of his father.  So Helander has his audience cheering for the kid when the kid proves not only to be right all along but the one who initiates the rescue of the children from the evil Santa.  The kid says at one point when he is about to be sacrificed: “Make sure you tell my dad what I did!”

Helander also piles on the black humor.  The captured old man thought to be Santa turns out to be only one of the hundred’s of Santa’s helpers.  The film is not short of violence (an ear is bitten off) and gore (blood everywhere) as well.

But the film suffers from an over extending that has little to do with most of the film.  After the father and son save the day, Helenader goes on with his tale to export Santa’s helpers as the rare exports.  This makes little sense and is as believable as the existence of a Santa Claus.

But apart from the last 10 minutes, Helander’s evil twisted tale of a murderous Santa Claus set in Lapland is a hellish sleigh ride full of both horror and delight.

Please note:
Film has an exclusive run this week at the Royal Cinema, Toronto! 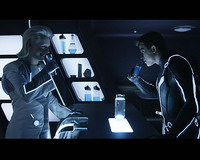 TRON LEGACY is the sequel to the highly successful TRON that finally hits the screen at Christmas after a lengthy 28 year wait.  Whether the wait is worth it depends on what one expects of a high tech emotion empty Hollywood flick!

For twenty years, Sam Flynn (Garrett Hedlund) pines the mysterious disappearance of his father Kevin (Jeff Biedges) an innovative software programmer and CEO of ENCOM International.  At the film’s start, an executive consultant for ENCOM and friend of Kevin Alan Bradley receives a mysterious page from Kevin. While searching for clues, Sam is suddenly transported to the digital world of The Grid. He meets the overdressed digital warrior Quorra (Olivia Wilde) and Tron (Bruce Boxletner).  Eventually Sam is reunited with his father and together set out on a journey to return home. Encountering vehicles, weapons, and landscapes that have become far more advanced than before, father and son must evade CLU 2 (James Frain), an updated version of Flynn''s original hacking program, which will stop at nothing to prevent their escape.

Exciting stuff?  Excitement is only as exciting as how excitement is created cinematically.

The action sequences are more visually attractive than exciting.  The fights consist mostly of the heroes dodging glowing Frisbees.  The explanation of the grid in the film must surely assume that audiences have never attended an electronics class.  The grid is supposedly be the path of communication flow in computers such like motorways where Ducati’s are ridden at top speed.  Any kid in science class knows that information flow is by means of electronics ion wires with bits one and zeros equivalent to a switch being either on or off.  The information is as dated as the pager used to communicate at the start of the film.

It is difficult to feel excitement and have anticipation for a film with such a weak narrative.  The characters move about and speak as if to a blank wall.  They look it too.  Olive Wilde is the pretty young thing who looks like an electronic doll.  Even the great Michael Sheen s Zeus or Oscar winner Jeff Bridges are unable to save the day.

Electronic music is by Daft Punk.

As formulaic is as a Disney family, so is the review of TRON LEGACY as a high-tech special effects film.  Hollow on plot, character, narrative and lacing in human emotions, the film excels in the technical achievement department.  See it and be wowed by the lights and glowing 3D effects, if not for anything else.  One will feel the high of playing a video game but will recall just as much once the game is over.

Best Documentary: The Kings of Pastry

Avoid: The Next Three Days