Extreme action fans should be pleased with the James Cameron produced SANCTUM, an underwater cave thriller which should be seen in IMAX 3D, no less.

Drama of another kind opens in the form of OLIVER SHERMAN, a Canadian psychological drama/thriller, the best film opening this week!

BIRDWATCHERS is a realistic drama on Indian rights in Brazil.  It is also the age old story of conflict between natives and the landowners.

But do not expect any elaborate over-wrought drama like Bernardo Bertolucci’s 1900 (Nouvecento) with overacting by stars like Burt Lancaster and Robert De Niro.  The actors in the case of BIRDWATCHERS are real Guarani Indians, and though all the actors are non-professional director Bechis did train them in the acting profession prior to filming.

The story is simple and the film’s aim is clear.  The film begins with tourists boating down a river running though one of Brazil’s famous rainforests.  They see Guarani natives on shore – in paint and the women topless, holding weapons like ancient arrows.  The camera moves back later to reveal the natives receiving wages (though they complain is not what they had promised) to act out their roles.  Both funny and sad at the same time, this is the dilemma of the Guarani.  They have lost their land and thus their ability to hunt for food.  They have to work for outsiders for insufficient funds.  Sadder still are two suicides revealed early in the film.

The result is the leader Nadio (Ambrosio Vilhava) to protest by taking his tribe to squat on its ancestral land, now owned by a wealthy farmer.  This causes problems and director Bechis brings his film to a disturbing climax.  Instructions of how the audience can donate to help the Guarani are flashed on the screen.  Though important, the tactic sort of reduces the impact of the film.

Bechis’ film feels like a documentary as his film charts the daily routines and troubles f the Guarani though the players are actors.  The authenticity is aided by the haunting music composed by Domenico Zipoli, an Italian Jesuit who worked with the Guarani in the early 1700s.

OLIVER SHERMAN (Garret Dillahunt), seven years after being shot in the head on the battlefield, Sherman Oliver (Garret Dillahunt, DEADWOOD) is still trying to pull his life back together.   The name comes about from the identity he was mistaken for in the hospital.  When he shows up unannounced and unexpected at the small town home of Franklin (Donal Logue) the soldier who saved his life, he is taken into the peace-time life Franklin shares with his wife, Irene (Molly Parker) and their two young children.  Though Sherman is clearly not "right in the head" Franklin feels bound by compassion and duty to try and do well by his fellow vet.

The first sign that Sherman is not all there comes with the spew of profanities he utters after a little mishap.  Other than that, he appears normal, except that he outlives his welcome and much to Irene’s chagrin, Sherman appears to be staying for good.  As the film progresses, Sherman’s temper appears uncontrollable (spitting at a barking dog) and when jealousy sets in, the safety of Franklin’s family is threatened.  Sherman’s intimidation scene with Irene is taut with tension and extremely well written and acted.

Director Redford’s film excludes graphic violence. One key murder scene is shown off screen.  Because much is left to the mind, the audience is never sure what can or will happen next.  Redford often teases with shots of Sherman’s knife, particularly in the film’s most suspenseful segment when Sherman reaches for it as he approaches Franklin.  The fact that nothing much is really mentioned of the type of trauma resulting from the head would makes the film even more suspenseful.  Sherman’s behavior is entirely unpredictable.  And as Irene says in one of the film’s scene: “Sherman, you are not a stupid person.”

Dillahunt, a big chubby but still sexy is impressive in his role of the character with contradictions.  But actor Donal Logue fares best as the man unsure of whether to aid a fellow soldier like himself who has not found it easy to get life settled again or to take his wife’s side.  Logue is so good in his role that the audience really cares for his character.

Redford’s tension builds brilliantly till the final scene when Sherman finally breaks down.  Not to reveal the ending, what occurs is totally believable and follows the mood and atmosphere so well created in Redford’s first film.  Ryan Redford is definitely a talent to be reckoned with!

DER RAUBER (THE ROBBER), from the novel by Martin Prinz and based on a true story tells the biography of Johann Rettenberger, a marathon athlete who developed robbing banks as a hobby.

Written by Heisenberg himself, this is a no-nonsense tale told from the point of view from an outsider who oddly judges not and has little sympathy for his protagonist.  The protagonist (the robber) who goes by the name of Johann Rettenberger (Andreas Lust) moves along like a machine with running as the only thing in life that motivates him.  Heisenberg does not attempt to have his audience feel sorry for Johann.  Johann murders and strikes without guilt or emotion, so that when the police hunt him down, the audience is not really on the side of Johann.

THE ROBBER therefore feels like a strange movie, with the lead functioning like a machine gone out of control.  The only time the audience sympathize with him is when he is not allowed to be alone.  And even then, when his parole officer gets on his case, the officer is struck dead, quite a blow for someone trying to do his job with some good intent.

Actor Andreas Lust is thoroughly believable as the running animal, sexy yet threatening, especially to his girlfriend Erika (Franziska Weisz) who betrays him at one point.

The intriguing fact about this movie is the question who or what is to blame for the current state of events.  Is it the correctional system or is it just this subject that is f***ed up.  But director Heisenberg is always reluctant to provide any answers, so much so that one wonders if this is deliberate or not.  Background information on Johann is alsoomitted (his childhood; family; education etc.), with the result that the audience has difficulty identifying with a character they know little about.

Still, THE ROBBER is a fascinating study on a human machine fixed on running and running alone.  If only more information would be provided for a better conclusion.

SANCTUM has the good fortune of having James Cameron’s name on the producer list.  Like many films screened on IMAX that take audiences into outer space, the cold Arctic or the underwater seas, SANCTUM is a film that contains shots of some of the world’s most amazing natural occurrences like underwater caves and rainforests.  Combined with fictional action, SANCTUM should provide fans of extreme action, the wet dream they have been waiting for.

The film is set in Papua New Guinea where an underwater cave diving team experiences a life-threatening crisis during an expedition to the unexplored and least accessible cave system in the world.  The team includes a father Frank (Richard Roxburgh) in an estranged relationship with his diver son, Josh (Rhys Wakefield).  As a storm approaches the entrance is sealed and the team has to follow underground streams to where they meet the ocean to escape.  A map is shown to the audience prior, so that the journey makes sense.  There are no monsters or humanoid creatures here.  The elements of nature are sufficient to provide enough menace for this film.  The film is based on the real near death experience of a similar diving incident of co-writer Andrew Wight.  The beginning credits boast the film inspired by a true story.

For an action flick, director Grierson’s film does not compromise in terms of blood, gore and terror.  The result is a very intense film (take for example the scene where a diver’s face gets caught in the pulley holding her up from an underwater cliff) with hardly any pauses to catch ones breath.  Alfred Hitchcock said that non action pauses where nothing happens are necessary in a suspense film and it is clear when viewing this film that he is right.  The audience is uptight for long periods so that the uneasiness spoils the entertainment factor.

The film uses the Cameron developed Fusion Camera system with the result that the film looks great on screen.  The underwater shots are well lit and the images crisp and clear.

Action, suspense and thrills from close calls replace story.  When father and son argue, the dialogue gets a bit corny.  A few funny lines like the father calling himself a heartless bastard elevate the tension and provide a bit of much needed humour.  Also, the script cannot resists lines like: “What can possibly go wrong diving in caves?”

For ultimate extreme action fans, SANCTUM does not disappoint.  And SANCTUM should definitely be seen in all the glory of IMAX and 3D, no question about it. 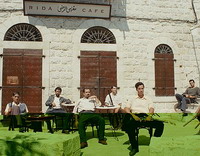 The film flashes the year1948 at the start with events following.  As the events unravel, it becomes clear that writer/director Elia Suleiman’s film is a personal tale infused with his unique sense of storytelling, one consisting of insightful vignettes many overflowing with deadpan humour.

The film begins in 1948 with the Israeli armed forces invading Palestine.  Many Palestinians remain in the ountry living as a minority and earning the nickname ‘Israeli-Arabs’.

The Palestinian Israel conflict is a tired, well worn topic covered in too many films already.  But Suleiman’s film is a breath of fresh air owing to the approach he has taken to his film.

It is interesting to note that the American presence is notably missing in the film.  The only two rare references appear as two fine moments in the film when a schoolboy is chided by his principal for saying that America is Imperialist and for making another comment.  “You can’t say these things,” reprimands the principle.

Also sad and critical is the scene where the major hands the key of the city over to the hands of the Israeli soldiers.  The segment is done in tongue in cheek with the major rolling his eyes while promises are made.  But the violence is also displayed as a woman is suddenly shot by soldiers after vocally protesting in the street.  But life goes on as the film traces a family continually having supper daily as if nothing has changed.

Suleiman’s refreshing film has gone on to deservedly win quite the few festival awards including the prized nomination for the Golden Palm at the Cannes Film Festival.

BEST BETS OF THE WEEK!!!