Opening this week are THOR, JUMPING THE BROOM and the romantic comedy SOMETHING BORROWED.

The new Spanish film EVEN THE RAIN is worth a look. 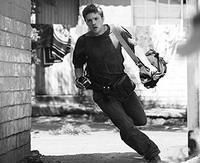 THE BANG BANG club is another film about death risk taking photographers in dangerous countries.  Films in this genre are not new, with the most famous THE YEARS OF LIVING DANGEROUSLY coming immediately to mind.  Others like HOTEL RWANDA have protagonists in other occupations (a hotel manager) taking risks to find the truth or save those in peril.

Director Silver’s film is exciting enough with a little romance thrown in as well, and it helps that the audience knows that what happens on screen is true.  More sympathetic too, is the act that Kevin Carter (Taylor Kitsch) actually committed suicide (overlooked in the film) after the South African elections when Silver chooses to end his film.  Ken (Frank Rautenbach) is shot dead while in action at the end of the movie.

It is strange then that the lead character appears to be Greg (Ryan Philippe) though the film shifts focus at many times to the other 3 characters.  Silver (Neels Van Jaarsveld), the most volatile of the group, has the least screen presence, though he would more likely make a more interesting character.  This seems to be the film’s problem with the film indecisive on who is the most important of the four.  The result is a film that lacks the punch that should be delivered from a story with a stronger, focused narrative.

Phillippe appears to have donned a South African accent (how good he is, I am no expert), but the script fails to mention where his character comes from.  Silver’s film picks up during the second half when the four work together as a team.

Both Carter and Marinovich won Pulitzer prizes for their work.  One segment explains the logic behind Maronovich’s win but Carter’s win is sort of frowned upon, which is interesting to note.

The film ends predictably (this tactic used far too often) with shots of the real life characters posing besides the actors during the end credits.  The ending also serves to enforce the point that director Silver has had good material in his hands that would have fared better in a more inventive film.

This Spanish Best Foreign Film Academy Award nominee is an ambitious complex film that ties together a timely related theme as a film crew shoots the conquest of Latin America in the South American Bolivia.  Bollan’s (a Spanish actress by profession) film works majestically as she understands the troubles of the poverty stricken Bolivians as well as the hypocritical white man filmmaking process.

A Spanish film crew helmed by idealistic director Sebastian (Gael García Bernal) and his cynical producer Costa (Luis Tosar) come to Bolivia to make a revisionist epic about the conquest of Latin America - on the cheap. Carlos Aduviri is dynamic as “Daniel,” a local Bolivian cast as a 16th century native in the film within a film. When the make-up and loin cloth come off, Daniel sails into action protesting his community’s deprivation of water at the hands of multi-national corporations.

But the fight is a fight for life.  The Bolivians hardly make enough to pay for the water and the families will perish in poverty as a result.  When riots break out in Cochabamba, protesting excessive fees for water, production is interrupted and the convictions of the crew members are challenged. Sebastian and Costa are forced to make an unexpected emotional journey in opposite directions.  Bollain’s film captures effectively both as aspects of the fight and the filming.

At the same time, the film demonstrates the Spanish imperialism (the stories of the stories of 16th century priests, Fathers Bartolome de las Casas and Antonio Montesinos, the first radical voices of conscience against an Empire) that resonates as problematic as it was in the Columbus days as it does at present.  At one point in the film, Costa is confronted with the importent decision of whether to do the film or help Daniel.

EVEN THE RAIN could have also worked as a documentary on water rights but Bellain has incorporated fiction into a marvellous tale that also tells the ugly truth of what multi-corporations continue to do to harm the planet.

Based on the book of the same name by Emily Giffin, SOMETHING BORROWED is a romantic comedy so predictable that anyone who has watched the trailer can guess correctly the outcome of the story.

Rachel White (Ginnifer Goodwin) is an unhappy, single, talented attorney working in a New York law firm. Rachel drinks too much on her 30th birthday and wakes up to find herself in bed with Dex (Colin Egglesfield), the man whom she has had a crush on since law school. The problem is that he is also her best friend Darcy''s (Kate Hudson) fiance. Relationships are tested while a long-time trusted friend, Ethan (John Krasinski), stands by Rachel with a secret of his own.

SOMETHING BORROWED feels really lame in the first quarter with silly jokes, unbelievable situations and clichéd dialogue.  But once director Greenfield’s film gets going, the real-to-life characters oddly spring to life, but still not enough tos ave the movie.  Despite the predictable storyline, the script occasionally contains clever lines, especially those penned for Ethan.  The parts where Ethan tires to convince Rachel to wake up and make Dex act as a man to declare his love for her (the result is actually the opposite with her declaring her love for him) is especially endearing.  The song and dance number choreographed and performed by Hudson and Goodwin (there is always one in movies of this sort) to demonstrate their friendship (to the tune of Pump It Up) is at least watchable.

The story is relatively simple.  The Mighty Thor (Chris Hemsworth) is a powerful but arrogant warrior whose reckless actions reignite an ancient war in Asgard. As a result, Thor is banished to Earth by his father (Anthony Hopkins), where he is forced to live among humans. So Thor has to redeem himself save Earth as well as Asgard. The chief villain is his calculating sibling called Loki (Tom Hiddleston).

Surprisingly, THOR works as a mighty adventure, very loud in sound with lots of special effects, grand fights and even louder explosions.  Director Branagh, best known for his Shakespearean acting roles (Henry V and Hamlet) directs THOR as if it were a Shakespearean epic.  In fact THOR is, as it involves the usurping of a Kingdom by a nasty sibling and the restoration of good vs. evil, very much like Shakespeare’s THE TEMPEST.

The action is well balanced by genuine humour, mainly provided in the segments where THOR is stripped of his superhuman powers and forced to live, in all places, New Mexico. There is an old fashioned mud fight as well.  Fortunately, there are funny encounters with three earthlings, one of whom he falls deeply in love with, Jane (Natalie Portman).

The 3D effects are nothing that special, and one wonders about the subjects of Asgard who are never seen, except in one sequence during the feast.  Costumes are impressive, especially the villain’s. The scene with the flying THOR with the hammer held high, the trademark of the comic, should appear more often.  For a violent comic book (the comic book is banned in Singapore where this critic comes from), Branagh’s film is quite tame.  There are no heads bashed in from Thor’s hammer.

Don’t expect any life lessons to be learnt or major discoveries from THOR.  If one is to take what is seen tongue in cheek, like as the king’s message: “A wise king never seeks war but must always be ready,”  THOR is more than passable entertainment.

Best Film Opening This Week: Even the Rain