Opening this week are CARS 2 an BAD TEACHER fighting for top spots at the box-office.

Other films opening include the Chinese epic BEGINNING OF THE GREAT REVIVAL.  The Joao Pedro Rodrigues retro runs at the TIFF Bell Lightbox.

THE GREAT REVIVAL here refers to the founding of the Chinese Communist Party (CCP) of China.  The film chronicles the events in the early 20th Century leading to the eventual founding after many executions and internal battles.

Directors Sanping Han and Jianxin Huang take great pains to construct an authentic looking period piece.  They succeed in this aspect.  The costumes, sets, wardrobe and art direction are outstanding.  The film starts off with the fall of the Qing Dynasty to the rise in power of Mao Zedong and the formation of the Communist Party.  The student riots (the May 4th Movement) form the film’s climax.  The film is nothing more than a large number of events strung together like a history lesson.  Though the set pieces are occasionally dramatic, the connection between the parts is loosely put together.  At over 2 hours, the film eventually drags on like a boring history lesson.

The film boasts an enormous list of famous Chinese stars performing key roles.  This would result in the ‘oh wow’ factor when someone famous is seen on screen.  Unfortunately for western audiences, most names are unfamiliar except for a few like Chow Yun-Fatt, Andy Lau and John Woo.

The irony of it all is that the Chinese would be best appreciative of this movie – for its lavish productions and countless famous star cameos.  But it is will also be the Chinese that would recognize the film as total communist propaganda propagated by the Chinese government who are as much guilty of the identical crimes of the government and monarchy they ousted.  It is reported that the Chinese were ‘forced’ to watch this film to up the box-office numbers of perhaps to be indoctrinated of the good of the communist party.

Whatever reason, this obvious one-sided film is not fooling anybody.

The sequel to the 2006 CARS movie this film should be a hit as it was reported that half of all the kids in the U.S. own at least one CARS toy.

The problem of CARS 2 the film is its minimal storyline.  Star race car Lightning McQueen (Owen Wilson sounding really winey in the voice characterization) and his pal Mater (Larry the Cable Guy) head overseas to compete in the World Grand Prix race. But the road to the championship becomes rocky as Mater gets caught up in an intriguing adventure of his own: international espionage.  But the embarrassing Mater fouls up Lightning’s first race and the friendship is put to the test.

The problem of animating cars is obvious from most of the film’s scenes.  Cars do not have arms to hug or embrace.  Lasseter gives the cars chains and a hook for arms and hands.  They do not have faces , thought faces are drawn on them.

CARS 2 plays like a James Bond movie with lots of car chases and British accents.  (Michael Caine’s is particularly recognizable).  Despite lots of fast moving action, Lasseter’s film gets boring really fast in the first half, which is quite surprising noting that his TOY STORY was so captivating in its storytelling.  Fortunately, the animation technology o CARS 2 is amazing. The second half of the film takes the CARS heroes to the likes of Paris o London with stunning replicas of the well known tourist sights.  As Mater’s rocket fuelled engine tows Lightning’s car sky high, the audience is taken on a whirlwind tour of London form the areas around Buckingham Palace, Big Ben and beyond.  At this time, one can safely forget the film’s flaws and just gawk at Lasseter’s amazing animation.

CARS 2 is the most action packed least heart tearing of the Disney films.  See it or whatever reason but the animation technology is simply mind boggling stunning!

It is weird that THE FUTURE IS NOW! is screened as a documentary as it clearly is a non-fiction film containing no documentary elements like interviews or recording of real events.  The film references the 1949 French film, La Vie Commence Demain.

But Gary Burns and Jim Brown’s innovative film feels like one the way the camera follows the protagonist from start to end of the film.  It all begins when he is caught on an interview by an optimistic journalist (Liane Balaban) giving a pessimistic view of the world and that mankind is hopeless.  She convinces him to go on a journey to enlighten his views beginning with a poetry reading.  When asks for his name, refuses to give it asking her to call him ‘the man of today’, to which she counteracts by having him call hr the woman of tomorrow.

The journey takes Paul (his real name) to Europe and the U.S. where he sees humanity in a different light.  The pessimistic Paul (Paul Ahmarani) for instance sees architects as egoists designing buildings for rich people, governments or conglomerates that will further the gap between the rich and the poor.  When he meets a well meaning Japanese architect in Metz, France who spends quite a bit of his life devoted to building shelters in way torn lands like Rwanda, he is taken aback.  Other important world class people he is arranged to meet include novelist Rivka Galchen, artist Marlene Dumas, writer and philosopher Alain de Botton and a past figure Jean Paul Sartre, in the film’s most fascinating segment.

All things go smoothly for a while (too smoothly and predictably) but fortunately, director Burns and Brown put in a neat twist to have Paul break his journey and question once again the future of humanity.

THE FUTURE IS NOW! works well as it has fascinating characters, enlightening debates and more than interesting social issues.  Humour (Gary Burns films like waydowntown and KITCHEN PARTY are very funny) is well blended with the drama making this film an engrossing watch from start to finish. 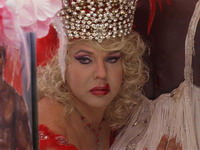 This is a story of the last depressing days transvestite, Tonia (Fernando Santos).  Based on a true story but sued by the author of the book who claims the story stolen from, the film has had its share of troubles.

Despite the familial storyline of the ageing drag queen upstaged by a younger, more beautiful performer, trouble with the straight boyfriend, Rosario (Alexander David) and fathering an angry son, Ze Maria (Chandra Malatitch), surprises lift the film out of the doldrums.

The best and sometimes insightful segment occurs when Rosario and Tonia get lost while on a road trip. In the forest, they encounter an ultra fabulous drag queen, Irene (Cindy Scrash) and her faithful servant, Paula (Miguel Lourerro).  Besides crroning in German, Irene has the answer to all of life’s problems.  She even has the best lines: “There are only tow kinds of people that find me: Those that look for me and those who are lost!”

But Rodrigues’ film is a mixed bag of tricks – sometimes lost but sometimes bang on its subject.  But running at over 2 hours, much of the unnecessary could definitely be trimmed.  The film was Portugal’s entry for that year’s Best Foreign Film Oscar but it never made the shortlist, likely for the reason of its too daring subject.