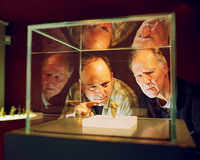 Here is the history: For over 20,000 years, Chauvet Cave has been completely sealed off by a fallen rock face, its crystal-encrusted interior as large as a football field and strewn with the petrified remains of giant ice age mammals. In 1994, scientists discovered the caverns, and found hundreds of pristine paintings within, spectacular artwork dating back over 30,000 years (almost twice as old as any previous finds) to a time when Neanderthals still roamed the earth and cave bears, mammoths, and ice age lions were the dominant populations of Europe. Since then, only a few people have been allowed access into Chauvet Cave, and the true scope of its contents had largely gone unfelt—until Werner Herzog managed to gain access. Filming in 3D, Herzog captures the wonder and beauty of one of the most awe-inspiring sites on earth, all the while musing in his inimitable fashion about its original inhabitants, the birth of art, and the curious people surrounding the caves today.

Herzog also puts in his two cents worth poetic philosopher.  A memorable part has an Aborigine automatically starting to redo a faded painting.  When asked why he did it, his reply was a surprised: “I am not the one who is doing it, but the hand of the painter’s spirit.  Herzog also teases with his voiceover occasionally.  With the imprints of a wolf and a boy, the remark is that it could be the boy and his pet wolf or the boy tracking the wolf or just maybe two tracks of boy and wolf separated by time.

Though a bit serious as in most of his films, Herzog’s CAVE OF FORGOTTEN DREAMS is still an important eye opening history lesson.

PAGE ONE: INSIDE THE NEW YORK TIMES s deftly gains unprecedented access to The New York Times newsroom and the inner workings of the Media Desk.

With the Internet surpassing print as our main news source and newspapers all over the country going bankrupt, Page One chronicles the transformation of the media industry at its time of greatest turmoil. Writers like Brian Stelter, Tim Arango and the salty but brilliant David Carr track print journalism''s metamorphosis even as their own paper struggles to stay vital and solvent. Meanwhile, their editors and publishers grapple with existential challenges from players like WikiLeaks, new platforms ranging from Twitter to tablet computers, and readers'' expectations that news online should be free.

If publications don’t go broke, they adapt.  These points are ignored in the film.  For example, local free weeklies the former EYE (now the Grid) and NOW save expenses by not sending their main critics to Cannes.  After all, all the Cannes news can be read on line, and these EYE and NOW post their reports online as well.  No mention is also made of the free dailies (like the Metro in Toronto) that are handed out all over the world.  Worse is that these are published by media that charge, and the question of the logic behind bastardizing should be mentioned in the film.

But if the film is one-sided, it is even more prejudiced towards The New York Times.  The film ends with the paper celebrating its winning of the Pulitzer Prize.  (See photo.)

Still Rossi’s film reveals the hectic pace of the paper as well as the troubles and problems faced by the staff.  The staff are not displayed as saints. At one point in the film, writer David Carr confesses being caught with blow.

PAGE ONE is obviously one-sided towards print journalism.  The free access to internet news is mentioned by necessity but the film clearly states throughout its stand that print media like the New York Times provide in depth researched articles that cost the publisher money to print and that readers should cough up their dues of they want insightful news.  Of course the question is that not everyone is that news savvy which is the reason print media is continuously failing.

At least at the film’s end, the audience will recognize the difficulties, if not respect, the often difficult and impossible mad jobs of the staff inside the New York Times.

Yet another film with the word ‘tree’ in it on the subject of loss and coping with death.  THE TREE OF LIFE dealt with the death of a child while Julie Bertucelli’s (SINCE OTAR LEFT) THE TREE the loss of a father of a large family.

Based on a screenplay by Elizabeth J. Mars, adapted from the novel Our Father Who Art in the Tree by Judy Pascoe, the film begins showing wife, Dawn (French actress Charlotte Gainsbourg) living happily with her husband Peter (Aden Young) and four children (Christian Bayers, Tom Russell, Morgana Davies and Gabriel Gotting) on the outskirts of an Australian town, their house nestled beneath a magnificent Moreton Bay fig tree.  Then tragedy strikes when Peter suffers a fatal heart attack, crashing his car into the tree.  The deceased’s spirit and the tree!

Overcome with grief, Dawn can barely get herself out of bed – until, one day, eight-year-old Simone (newcomer Morgana Davies in a mesmerizing performance) shares a secret with her mom.  Simone is convinced that her father is whispering to her through the leaves of the tree and that he’s come back to protect them.  Even Dawn takes comfort in the thought.  At this point, Bertucelli leaves the audience to make up their minds whether all this mumbo jumbo is actually happening.  Of course, it is immaterial to the story as it is the events that follow that is in concern.

As in Terrence Malick’s THE TREE OF LIFE, THE TREE is a very heartfelt film.  Bertucelli herself suffered the loss of her husband during the filming.  She captures the loneliness, the irrational behaviour and the environment of not only Dawn but the other children as well.  Davies who plays the young daughter, Simone is especially good. The Australian South East Queensland area is shown in all its raw grandeur (like in the majestic tree) and danger.  There is the constant threat of bush fires and water shortages.  The climatic cyclone lifts the film above the standard drama.

But after the film has made its half way mark, THE TREE remains stagnant.  It is as if the film has lost its life and cannot move on.  Whatever transpires in the first half just moves undramatically on, till the ending.  Bertuccelli’s film accomplishes what is intended in the first half and in terms of emotions and spirit, the second half of the film can me omitted.

ZOOKEEPER is yet another unfunny family comedy about animals that talk.  Thank God they do not sign and dance as well.

A group of zoo animals decide to break their code of silence in order to help their lovable zookeeper, Keyes (Kevin James) find love with Stephanie (Leslie Bibb).  Their help unfortunately involves him imitating animal mating rituals that are embarrassingly silly.  Kevin James will be in the running for the raspberry award for worst performance of the year for sure.  Then Keyes finds true love with the other zoo worker (Rosario Dawson).  No surprise here!

Director Coraci’s comedy track record includes Adam Sandler’s THE WATERBOY and THE WEDDING SINGER.  Despite these being hits, closer scrutiny reveals these films as unfunny wastes-of-time.  The only funny joke in WEDDING SINGER was Steve Buschemi’s best man’s speech and the WATERBOY had Kathy Bates save the show.   Despite ZOOKEEPER’s terrible premise – talking animals coaxing Keyes to get his girl, the film contains no funny parts.  Despite a few moments that could possibly balloon into laugh-out loud hilarity, all potential is lost.   The so-far best moment is the ballroom dance scene involving Keyes’ ex and her ex’s ex.

When the animals do talk, they sound gibberish.  It is hard most of the time making out what they say, and the jokes often fall flat.  This is despite a fine cast of voices characterizations that include Sylvester Stallone and the lion, Nick Nolte as the gorilla, Adam Sandler as the monkey and Judd Apatow, Cher and Rob Schneider.  I doubt that most of the audience would recognize the actors’ voices had they had not seen the cast list.

The film starts off pretty well though with ZOOKEEPER Keyes being rejected of his marriage proposal by Stephanie.  At least the scene allows the audience to feel sorry of the unlikely hero and root for him.  All this goes to waste by the second half of the film where Keyes turns into an annoying, irritating suitor to the likes of Jack Black or Zack Halifianakis, two of the most irritating people on the planet.

ZOOKEEPER is unfunny, stupid and totally predictable.  It is clearly no DR. DOOLITTLE or even A NIGHT AT THE MUSEUM.  Even kids will likely get bored with the unintelligent banter of both the animals and the human beings.