Opening this week are THE THING, THE BIG YEAR and FOOTLOOSE.

But best is to catch the Henri-Georges Clouzot’s retro starting this week at TIFF Bell Lightbox.  (See associated article) 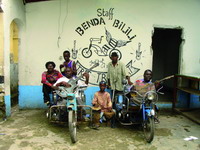 Nothing from the Congo ever but two films have been released this year form the African republic.

BENDA BILILI (meaning Beyond Appearances) the first documentary to ever open the Cannes Director''s Fortnight, shows what life is really like in the democratic republic.  A boy’s voice is heard on the soundtrack when the film starts, that stealing is a way of life in the poor place and that it would mean nothing if he stole the camera and ‘comed’ the director of the film.  The film is set in the Kinshasa slums which have become a haven for the homeless, the physically disabled and the wayward youth of the area, offering them an alternative to the violent street life that surrounds them.

These youth are talented musically and an elder organises them into a sort of orchestra making music using simple musical instruments.  The music generated is upbeat happy and the tunes are catchy.  It is no wonder that they cut a record within a year and earn some badly needed money.  The directors’ film flows freely, much like the music and allows the players and music itself to tell the story and enchant the audience.

The filmmakers follow the band over four years.   The group rises from the streets to the concert hall as they unbelievably become one the hottest acts in the world.  The result is a realistic sometimes emotional film about what the power of music and human endurance can achieve.

REVENGE OF THE ELECTRIC CAR could be considered the documentary sequel to Paine’s 2006 WHO KILLED THE ELECTIC CAR?  In the first doc, Paine chronicles the death of the electric car, pointing the finger at all the culprits (or murderers) riling the wrath of the audience at the injustice done.

A different approach is taken in the new 2011 film.  While beginning with the notion that all big companies (like GM) are bad companies, this film documents the tremendous efforts and financial difficulties of all the car manufacturers that undertake the new

The documentary can be divided into two parts.  The first summarizes what happened prior to the resurgence of interest – how the initial electric cars were demolished under wrong executive decisions.  It continues to herald the car’s advantages and its future in a world of depleting oil resources.  The second half of the film takes a different tone with the note that the economy crumbled with all the major auto manufacturers in deep trouble.  Footage is included of the process of GM bailed out of bankruptcy by the Government.  This continues with almost equal time spent with GM, Nissan and Tesla car companies as each strive to put out their saleable electric car on the market.  The big shots Elon Musk (Tesla), Carlos Ghosn (Nissan) and Bob Lutz (GM) are given time in the movie and now perceived as the good guys.  One can say that Elon Musk is the prime protagonist and hero of this movie.

Paine was granted almost unlimited access to the auto giant’s facilities for the making of this film.  Thus, the audience is given an informative and educational view of the survival of big businesses – trying to survive stiff competition in a poor economy.

Paine does not invoke any anger of his audience in this movie.  Instead he rallies the audience’s support for a worthwhile venture that would hopefully put electric cars on the roads.

Paine ends his film on the same high note as he did in his first film - that all will band together to re-introduce the car that requires no gas, oil, brake or filter changes, and one that actually becomes cleaner the longer it runs.

Jeff Nichols’TAKE SHELTER is a psychological drama winning the Critics’ Week Grand Prize, as well as the SACD (Society of Dramatic Authors and Composers) Award for screenwriting, at the 2011 Cannes Film Festival.  No surprise, as the film deals with real drama, personal drama that leads to family drama to drama at work and every other facet of the protagonist’s life.

Set in a small blue-collar Ohio town, the story centres on Curtis (Michael Shannon) who lives with his beautiful wife (Jessica Chastain from TREE OF LIFE) and young hearing-impaired daughter.  Money is tight, especially when navigating his daughter’s health care needs.  Nichols, who also wrote the script, piles on the troubles on Curtis.  Curtis has apocalyptic dreams – rain turning into oil, birds falling from the sky.  So convinced he is of the reality of the forthcoming storm that Curtis takes a loan to build a storm shelter.

Nichols builds the tension slowly but effectively.  His film takes its time to let the events unfold as it demonstrates Curtis slow descent into madness.  He even checks himself to a medical facility concerned about his mental state, as his mother suffered from mental schizophrenia.  Nichols appears to believe in the strength of family.  Curtis brother is there for him offered him support as does his long suffering wife.

As the film progresses, the film appears to hinge on the fact on whether a real apocalyptic storm would appear or not.  But all the events in the film point to the fact that all the duress is due to Curtis nightmares and also, a part due to his mental problems.  This is where the film fails.  Nichols is too sympathetic to his protagonist.  He can do harm to his family in terms of mistrust, fits and bouts of anger, but his wife forgives all and is too kind and loving for credibility.  The sexual relationship between Curtis and wife is noticeably neglected.

But for sheer build up of paranoia and fear, TAKE SHELTER succeeds admirably.  Shannon is a good actor that can radiate trouble and duress and should be a future player to be reckoned with.

At the promo screening of THE THING, Toronto actress Kim Bubbs (who plays Juliette in the film) credited the influence of John Carpenter’s THE THING to this prequel, while relishing the point of two string female leads in an otherwise all male movie concerning scientists stuck in Antarctica.                                                                         True to her words, THE THING is similar to the 1982 Carpenter’s THING in terms of scares and impressive special effects.  But no mention had been made though credit should go to the original Howard Hawks film.  The film follows a paleontologist (one can google the meaning of this term) Kate Lloyd (Mary Elizabeth Winstead) travelling to the desolate region for the expedition of her lifetime.  With a strong female lead and one of the first casualties being Juliette, the female presence is do doubt felt, aided by the script by Ronald D. Moore and Eric Heisserer which has the heroine make the main crucial decisions regarding THE THING’s attacks.

Joining a Norwegian scientific team that has stumbled across an extraterrestrial ship buried in the ice, the crew discover an organism that seems to have died in the crash eons ago.  But it is about to wake up.  When a simple experiment frees the alien from its frozen prison, Kate joins the crew''s pilot, Carter (Joel Edgerton), to keep it from killing them off one at a time. And in this vast, intense land, a parasite that can mimic anything it touches will pit human against human as it tries to survive and flourish.

Though serving as a prelude to John Carpenter''s classic 1982 film, this film stands pretty much on its own.  As far as horror fans of this genre are concerned, who really cares whether the film is a prequel or a sequel as long as the scare and special effects come steady and strong?   This the directors Van Heijnjngems provide more than adequately.  The claustrophobia of the ice station is well created as a major storm approaches as the crew are stranded in the premises.  The CGI effects are minimal if non existent but the special monster effects are more than stunning with repeated scenes of claws and flinging tentacles taking out its victims.  The transformation from human to beast by the thing looks terrifying realistic.

Odd that it may seem, the best scary sequence concerns Kate checking the mouths of each of her fellow mates for fillings, the reason being that then thing cannot assimilate inorganic material.  Thus the existence of fillings indicates that the bearer is a true human and not the thing replicating it.  Using pure theatre, it is interesting to note that the best scares can be realised without any special effects or blood as in the Howard Hawks’ original.

If one is not too critical of the film, ignoring the film’s flaws such as poor interaction of the characters, the new prequel THE THING serves its goal with the audience put at the edge of their seats during most of the film’s running length.