Also opening is the Roman Polanski retro at the TIFF Bell Lightvbox and the Brit hit, TINKER, TAILOR, SOLDIER, SPY. 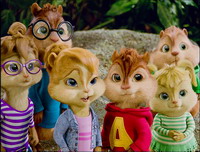 ALVIN AND THE CHIPMUNKS: CHIPWRECKED is the third of the Chipmunk films – and if one wants to complain at these films, the by all means avoid the latest!

To be fair to the filmmakers and director Mike Mitchell, who came on board after SHREK FOREVER, ALVIN AND THE CHIPMUNKS: CHIPWRECKED is a kid’s film and a younger kid’s film at that.  The humour is catered to them, so the film succeeds in entertaining them. The young girl seated in the same row as myself was jumping for joy in her seat, to the music and songs from the film.

The plot is simple enough, without a too terrible villain to scare the children.  The only baddies are Ian (David Cross) who has mellowed out from bad to not so bad in this third film, a kind of goofy guy that is fun for the kids to laugh at.  The other is a girl, a meaner one who is after the treasure hidden behind a waterfall.  Playing around while aboard a cruise ship, the Chipmunks and Chipettes accidentally go overboard and end up marooned in a tropical paradise. They discover their new turf is not as deserted as it seems.  The rest of the film has Simon (Jason Lee) searching for the Chipmunks and the Chipmunks for Simon.

Most of the voice characterizations from Justin Long to Jesse McCartney are intact.  The chipmunks’ squeaky voices, though at times difficult to understand are a trademark of these troublemakers.

Director Mitchell does a fairly good job keeping the film entertaining.  The film is not as maniac as his SHREK FOREVER, and the film is the best of the Chipmunk trilogy.

The introduction of the Chipettes allows more musical numbers to be added.  The climax of the film involves them trying to make the Music Awards and they perform a bright number that should keep the kids happy, if not dancing in the aisles.

The documentary focusing on the life and times of a local skate boarder, Josh Skreech Sandoval is obviously one that does not aim to please.

Josh’s life is a mess.  He has a girlfriend and child, has no ambition besides skateboarding and his only goal in life is to travel and see the world.  Those who have travelled and seen the world can attest that this is no great feat.  And best of all, Josh is not that good at the sport or good looking either. Director Tristan Patterson follows his subject from the stagnant suburbs of Fullerton where he lives to skateboard competitions in Sweden.  The landscape of broken homes and empty abandoned swimming pools is something that audiences seldom see.  Patterson infuses his film with alternative soundtrack of bands from independent labels like Mexican Summer and Kemado Records-including Best Coast, Bipolar Bear, Children, Dungen, Eddy Current and the Suppression Ring, Golden Triangle, Jacuzzi Boys, Little Girls, among others.

If Patterson’s film celebrates youth, it is an odd destructive journey in which Skreech is half self destructive most of the time.  Though the film is never boring, DRAGONSLAYER refuses to confine itself to the realm of normal filmmaking.  DRAGONSLAYER thus emerges as a rare tasting cup of tea, but something a few might really appreciate.

The 4th instalment of the MISSION IMPOSSIBLE series which is partly shot in IMAX, takes hero Ethan Hunt (Tom Cruise) on yet another impossible mission that he accomplishes.  He has a cool crew with him to help him out this time around.

This is James Bond style action, with lots of gadgets, humour and style thrown in.  With the last 2 Bonds films (especially the last awful one), 007 has some serious competition on his hands.

Director Bird (THE INCREDIBLES) seems to have got everything right for this film.  The film’s pacing is excellent, the film flows smoothly and the thrills come on fast and furious.

The film’s three major action set pieces are imaginative, edge-of your-seat exciting and downright awesome.  The best one takes place midway in the movie with Hunt scaling the largest building in the world, Dubai’s Burj Khalifa.  Seen on the IMAX screen 4 storeys high, this is real height.  The other two has one talking place in a sandstorm with Hunt using GPS to track a villain and the brilliant climatic one taking place amidst moving platforms in a BMW assembly line.  If that is not all, these action segments are supplemented by a suspense set piece involving team member Jane Carter (Paula Patton) extracting launch code information from a rich Indian suitor (Anil Kapoor) just in the nick of time.  The script by Andre Nemec and Josh Appelbaum is daring enough to play into Hunt’s past, with the so-called death of his wife (Michelle Monaghan), something never touched on in the previous MI films.

From the start when the audience’s adrenaline flows from hearing the original Lalo Schrifin’s Mission Impossible TV soundtrack to the last frame after 133 minutes, MI4 is one hell ride of a movie.  Tom Cruise – cool, smart and still terribly sexy - proves that he still has what it takes to make one of the best action movies this year.

As in the 2009 film, Robert Downey Jr. portrays the brilliant detective as an uncouth, ill-mannered, loudmouthed and proud man, someone one would definitely avoid at the local bar.  His best mate, Dr. Watson (Jude Law) who he often fights with has at least a few redeeming qualities.

Ritchie has turned the Sherlock Holmes that everyone loves into an action figure.  He is no longer the problem solver but a brass knuckle fighter of the worse kind.  The result is a God-awful film that is all over the place, careless in plot and script and makes no sense whatsoever.  The prime example is Watson saying to an unconscious Holmes: “The man is not breathing!”  Watson goes immediately to give the man CPR instead of rescue breathing, which will not help even if his heartbeat is resuscitated.  It is as if Ritchie just cannot be bothered with any details or accuracy with his film.  The climax of the film involves an Alfred Hitchcock style assassination but on one knows who the killer or who the victim is.  But as far as any audience anticipation or suspense is concerned, there is none.  Holmes blurts out his theory which is displayed on screen – one in which makes no sense at all and is just plain babble.

Where the majority of a Sherlock Holmes film takes place indoors, here most of the action is outdoors.  The film contains a ridiculously lengthy and inconsequential chase scene taking place in the woods.  The segment is shot in a mix slow-motion, freeze frame mix, which makes no sense at all.  The visual effects here, though of course stylized (Ritchie cannot somehow get that out of his system, though he did get rid of Madonna) looks like something right of THE MATRIX films.  Ritchie could have remade a MATRIX film here, for all that matters.  Then, the villain Moriarty (Jared Harris) releases a huge missile that is shot right through the trees in the woods at Holmes and his friends.  The missile, nicknamed ‘Little Hansel’ bashes down trees (in slow motion) and makes lots of loud noise, but serves no purpose again.

Ritchie follows the formula that a sequel has to be louder with more explosions and action.  That, one will find in A GAME OF SHADOWS, but whatever happened to solving a murder through clues, Sherlock Holmes style?  I am quite tolerant of free adaptations but this film takes the limit.

This film and MISSION IMPOSSIBLE 4 both open the same day.  By inevitable comparison, the SHERLOCK HOLMES movie is pale, silly, stupid and a waste of time.  If one wants explosions, action and style, MI:4 more than delivers!

TINKER, TAILOR, SOLDIER, SPY based on the 1974 John Le Carre novel, could be described as a no-nonsense spy film, the way a spy thriller should be. No glamorized James Bond type sensationalisation here, but what actual spies (le Carre was an agent) go through with all its daily monotony, danger and grubbiness.

The film begins with George Smiley (Gary Oldman) a middle-aged, intelligence expert currently forced out of retirement.  He is recalled to hunt down a Soviet mole in what is termed the “Circus”, the highest echelon of the British Secret Service headed by Control (John Hurt).  While the circus works simultaneously on an operation called Witchcraft, the mole is caught and flushed out.  The title of the film comes about from the nicknames Control had coded for the suspects - “Tinker” (Alleline), “Tailor” (Haydon), “Soldier” (Roy Bland) and “Poorman” (Toby Esterhase), all of whom are part of the circus.

Director Alfredson (LET THE RIGHT ONE IN) often shoots in a dull grey palette.  The modish atmosphere of the 70’s cold war comes across effectively on screen, reflecting the older serious spy films such as THE SPY THAT CAME IN FROM THE COLD or THE LOOKING GLASS WAR.  Though I have never seen the TV series starring Alec Guinness as Smiley, word out has it that this film is no disappointment.  Gary Oldman as the expressionless Smiley is excellent and still makes his impression on screen.  Smiley, is described by the author Le Carre as a turtle who never changes his expressions or the Bible’s meek that does not inherit the earth.  Ironically Smiley is placed temp head of the circus to weather things back to normal.

The plot is at times a tad baffling as there is a lot (plot and characters) to be condensed from the novel.  But two and two can be pieced together to make head and tail of then plot.  The story takes diversions occasionally, like the one in which a crippled Prideaux (Mark Strong) takes a job teaching in a Devon school only to be constantly hounded by a student hero-worshipping him.

The cast is more than impressive with stars like Oldman, Ciaran Hinds, Colin Firth, Tony Jones, John Hurt and the incomparable Kathy Burke (eclipsing my favourite actress Beryl Reid as Connie Sachs role in the TV version.) Other familiar British faces such as Benedict Cumberbatch as the closed homosexual, Peter Guillan also make their mark.

With all the dialogue and espionage taking place throughout the film, the last 10 minutes when Alfredson ties everything together with Prideaux appearing taking his revenge on the mole, appears a bit rushed.  Still, it is an exciting finish, fast and efficient in one of the best shot and effective spy films made in a long while.