THE AMAZING SPIDER-MAN begins its run at midnight Monday and is definitely going to be a sure-fire hit! 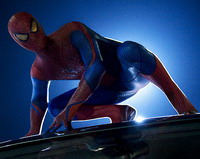 After the mediocre 3rd issue of SPIDERMAN 3, the filmmakers made the (then shuddered upon) decision to reboot the SPIDERMAN franchise.  Using a new actor, the British reared Andrew Garfield and one of the top rising directors currently , Marc Webb of (500) DAYS OF SUMMER, the result of the new film is amazing, short of stupendous.

Most of the story has remained intact safe for a few minor changes.  Peter Parker (Andrew Garfield) finds a clue that might help him understand why his parents disappeared when he was young.  His path puts him on a collision course with Dr. Curt Connors (Rhys Ifans), his father''s former partner who ends up a mighty lizard and his arch enemy terrorizing NYC.  But Peter still manages to find romance in the form of classmate Gwen Stacy (Emma Stone fro EASY A) who turns out to be the daughter of Police Captain, Cpt. Stacy (Denis Leary).

As far as updating the franchise, the setting is more current with the times.  The characters now communicate using cell phones and the internet.  The girl, Gwen is more pro-active, aiding Peter Parker in his fight instead of being just a laid back girl friend.  Peter uses his skateboard is learning to use his superpowers.  His costume is also updated, designed by the Cirque de

The 3D and special effects are top notch.  This film should be seen in 3D and IMAX and make sure you are seated relatively front so that you can see both the bottom and top of the screen to get the full effect.  Music video expert director Webb knows how to get his film soaring.  When Spider-man soars through the air, landing in the famous crouching position, he ensures the audience’s emotions reach new heights.

But what is even more amazing is the film’s romantic element.  It is usual for the romance in an action flick to be a distraction.  But this director who knows how to deal with emotions as he did in his spectacular (500) DAYS OF SUMMER two years back, has created one of the best love stories experienced in a film this year.  Make sure you have your box of Kleenex with you.

Using veteran actors such as Martin Sheen and Oscar winner (we all love) Sally Fields to play Parker’s Uncle Ben and Aunt May pays off.  They provide the emotional roller coastal ride.  Garfield is 100% in top form as the nerdy yet sexiest Spider-man on film as Emma Stone is the sexiest Gwen Stacy.

Director Webb ‘s first hour of film contains the most audience compelling sequence of segments I have seen this year on film.  Using a variety of devices, like technical jargon, emotions, familial ties and surprise, bullying and action, his film works wonders.  Take for example, the look of a villain’s (Irrfan Khan) face, when Parker knocks his folder over in the facility visit.  I have not seen such a villainous look since a Hitchcock film when he personally picks out these actors. And all this happens before the real action starts.

The audience should stay for the end credits as a major plot turn appears mid-way before they end.  There are surprises up Webb’s sleeve from start to end.