Openings this week are Woody Allen’s TO ROME WITH LOVE and Oliver Stone’s SAVAGES.  THE AMAZING SPIDER-MAN opened earlier this week.

If there is an intense film about drug trafficking, SAVAGES, the new Oliver Stone film is the one.

Entrepreneurs Ben (Aaron Johnson from ALBERT NOBBS), a peaceful and charitable marijuana producer, and friend Chon (Taylor Kitsch), a former Navy SEAL, run a lucrative, home grown industry - raising some of the best weed ever developed. They also share a one-of-a-kind love with Ophelia (Blake Lively). Life is idyllic in their Southern California town... until the Mexican Baja Cartel decides to move in and demands that the trio partners with them. When the merciless head of the BC, Elena (Salam Hayek) and her enforcer, Lado (Benicio Del Toro), underestimate the unbreakable bond of the three friends, Ben and Chon - with the reluctant assistance of a dirty DEA agent (John Travolta) - wage a seemingly unwinnable war against the cartel.

The script co-written by Stone, Don Winslow who also wrote the novel the film is based and Shane Salerno contains lots of over-the-top dialogue and offbeat advice, which is more than entertaining to listen to.  The main character is called O, short for Ophelia, described here as the bi-polar basket case from Hamlet.  Advice given by Elena to O is that the two guys cannot both love her but instead must love themselves in order to share her.  Best is the script’s definition (with the help of visuals) of the term SAVAGES at the end of the film.

The film can hardly be described as suspenseful or action packed.  The word intense is a more appropriate word.  Stone ensures his film is more intense than anything else.  He uses visuals and sounds to shock the audience like in the scene when the young Mexican is shot by Lado because he is too sensitive or when a driver is shot in the car.  The explosions are also louder than necessary.

But Stone keeps a tight control of his film and SAVAGES has a consistent intensive fell throughout.  There is without doubt, not a dull moment.

The soundtrack is often screaming loud with blasts of amusing Mexican rap, whatever the Mexican lyrics mean.

Stone is also fond of shooting in saturated colours, the brightness as if melting the celluloid on screen.  The result is a gaudy look which suits the overall nature of the film.

Too savage for its own good (lots of decapitations and body parts), SAVAGES is nevertheless the typical Oliver Stone compelling styled film.  Like PLATOON and NATURAL BORN KILLERS, be prepared to be both shocked and jolted out of your seat.

TO ROME WITH LOVE is one of the only Woody Allen films that opens with popular Italian folksongs instead of his standard Cole Potter tunes.  It is, after all, Woody’s tribute to Roma, his next muse city after Paris and London.

TO ROME WITH LOVE consists of four vignettes unspooling against the city’s
Roman backdrop, from outdoor cafés to famous sites like the Trevi Fountain and the Spanish Steps.

There is a lot of Woody in these stories.

The first story involves John (Alec Baldwin) is a well-known American architect, visiting Rome, where he lived as a youth.  While perusing his old neighborhood, he meets Jack (Jesse Eisenberg), an architecture student reminiscent of himself.  Jack has a
girlfriend (Greta Gerwig) but ends up falling for her man-eating friend (Ellen Page).  It
triggers John’s memory of one of the most painful episodes of his own life.  One can see that is Woody himself playing two of his life’s roles in this story.  He is now the older John giving advice to Jack, the younger Woody when he was at a younger age. Meanwhile, an ordinary Roman (Roberto Benigni) becomes famous; this is perhaps the just famous Woody when he won the Oscar fro ANNIE HALL when he rejected fame and ignored the Oscar ceremonies for his weekly clarinet session.  Out-of-town newlyweds (Alessandra Mastronardi and Alessandro Tiberi) get accidentally separated, him ending up with a call girl (Penelope Cruz).and her with a movie star (Antonio Albanese) and handsome thief (Riccardo Scamarcio).  The final has Jerry (Allen), a retired opera director who has arrived from America with his wife (Judy Davis) to see their daughter (Alison Pill) and meet her Italian fiancé (Flavio Parenti).  When Jerry hears the fiancé’s father (renowned tenor Fabio Armiliato) singing in the shower, he decides that the man should be on the stage.  As it turns out, there is a big problem in that he can only perform in the shower.

Woody gives himself as the father the most hilarious lines.  He does not get hang around the younger women as he did in SCOOP so it is a pleasure to see him whenever he appears on screen.  The film feeds his ego as the elder and more experienced have their say and way in the film.  But again, the main story concerns male infidelity, in this case of Jack leaving his girlfriend.  But he has an excuse as he has met a real man-eater.

TO ROME WITH LOVE is also funnier than most of Woody’s recent movies.  The opera with the shower is reminiscent of Woody’s absurdist comedies like LOVE AND DEATH, BANANAS and SLEEPER.  But he goes a bit overboard here.

As Woody as opted for comedy rather than drama in his latest enterprise, the film lacks a stronger narrative whole.  It seems that Woody is putting together his past successful films including PLAY IT AGAIN SAM where Jack appears like Humphrey Bogart giving advice to the young Jack.

Though this is not the best of Woody’s work, TO ROME WITH LOVE is still a tad enjoyable entertainment. 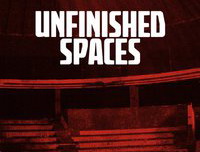 UNFINISHED SPACES is a 2011 documentary film about the revolutionary design of the National Arts School in Cuba.  The film tells the dramatic story of the art schools from their founding by Fidel Castro and Che Guevera to their eventual abandonment and fall into ruin and recent efforts to restore them.

Though a 10-year film project, UNFINSHED SPACES is more of an information piece leaving the audience to decide the message or the impact of the story.               The Best Arts School in the world is to be built in the golf grounds where Castro plays golf.  This is what Castro decided on a whim as shown in the film.  Immediately, three visionary architects Ricardo Porro, Robert Gottardi and Vittorio Garatti are recruited.  They accept the project because money is no object but the time frame is limited.

Things do not go as planned as the school is divided into various departments like dance, sculptor, painting etc.  The lessons begin as the construction continues.  But their design falls into disfavour with the Revolution and the construction abandoned until today when it looks like ruins and restoration has just been initiated in the process.

Other than that, the film illustrates the result of a lack of planning and co-operation between the political, artistic and architectural departments.