New films openinhg are THE PAPERBOY, PARANORMAL ACTIVITY 4 and ALEX CROSS with the latter two expected to dominate the box-office this weekend. 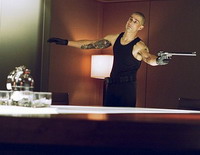 ALEX CROSS the film is based on the character of the same name in the James Patterson’s books.  But the scriptwriters and director of the ALEX CROSS film have made quite a lot of changes lifting the location from Washington DD in which Cross works in the FBI in most of the books, to Detroit.

In Detroit, Cross is a cop.  He wishes to get out of the dangerous job by accepting an FBI desk job in Washington.  But his wife, Maria (Carmen Ejogo) is against the move as she works in Detroit and the children do not want to change schools.  So far, 2 films, ALONG CAME A SPIDER and KISS THE GIRLS have been made of the Cross character, both starring Morgan Freeman in the title role.  Tyler Perry plays Dr. Cross in this film, the first role in a film he did not direct.  Perry is actually very good in as Dr. Cross, who holds a psychology degree.

But the more interesting character in the movie is the hired assassin, known as The Butcher or as Picasso (Mathew Fox who lost all his excess fat for this role.)  If the term lean mean killing machine is to be applied to anyone, it is to the Butcher who thrives on violence.  When Cross’ partner Tommy (Edward Burns) asks why a victim had all her fingers cut off as the Butcher only required her to answer to one question during the torture, the reply was that he did it for pleasure after getting the answer after one digit was chopped off.

ALEX CROSS is an ultra-violent film, slickly made and executed.  The villain in the film is one step smarter and stronger than Cross or many men put together.  The scene in which the Butcher enters a caged match just to make some money is a compelling watch never mind it being a distraction to the plot.

The best thing of the film is the unexpected twist at the end.  When one is about to question the motive of The Butcher, as there is none to the killings, the final twist reveals something completely different.  The fact that the movie does off with key characters makes this film unsuitable to general audiences who might like this level of violence.  (Consider UNTHINKABLE, another ultra violent torture cop film that starred Samuel L. Jackson)

The film also contains a great cast with superb supporting roles by Giancarlo Esposito as super gangster Daramus Holiday and Cicely Tyson as Cross’ grandmother who he calls Nana Mama.

Despite its flaws, ALEX CROSS is a totally exciting pulp thriller from start to finish.  I loved the ultra violence, action and gore!  And the tables are turned with a black man being the good guy with the brains (Mr. Tibbs of IN THE HEAT OF THE NIGHT taken to the limit) and the white guy being the villain.

Lee Daniels’ follow up of his 2009 cult drama PRECIOUS is so full of atmosphere that one could almost smell the stench of the dirty southern swamps of Florida.

The film begins with a trashy black woman. Anitx (Macy Gray) being interviewed in relation to the murder of a racial fat sheriff.  In her own words: “Someone got fed up with his fat ass and killed him.  That’s what happened!”  This is the funniest line in the movie.  But apart from that interview where it appears that the story is told from the Anita’s point of view, the film shifts all over the place from ne protagonist to another with the story ending up not seen from anyone’s pint of view despite the narration.

The murder is pinned on Hillary Van Wetter (John Cusack) whose wife, Charlotte Bess (Nicole Kidman) has a love/hate relationship with him.  The Miami Times sends two reporters Ward Jensen (Matthew McConaughey) and his black partner (David Owelowo) into town to do the story but they take it upon themselves to do the right thing to clear Hilary’s name.  Ward is from the town.  Into the picture comes Jack (a very buffed up Zac Efron who prances around in his white underwear as they were going out of style), unemployed and creating trouble such as falling in love with Charlotte and lusting over Anita.

Apparently Jack is not the only one in the family who fancies the darker skin.  Brother Ward does too, but of the other sexual orientation that leads him to almost beaten to death in one disturbing scene.

Director Daniels seems fond of jolting his audience out of their seats with uncomfortable scenes such as the bloody gutting of an alligator, a no-touch sex scene and an all touch violent sex scene in which one wonders whether Charlotte is screaming out of sexual pleasure or out of hurt.

But with the narrative jumping all over the place, whatever atmosphere created is lost in the muddle of the story.  No one really cares about the murder or the romance or anything else in the story.  The story seems to be plodding along aimlessly.

Kidman is marvelous as the sexual Sothern belle but the prize performance goes to Marcy Gray as Anita the maid.  Too bad all the performances seem wasted to nought in a film that should have all come together.

The film begins with ‘found footage’ of the sudden disappearance of a mother and son.   It continues, years later, with teens Ben (Matt Shively) shooting Alex’s (Kathryn Newton) brother Wyatt (Aiden Lovekamp) at his soccer game.  Ben then continues filming Alex in her tree house suddenly find the neighbour’s kid Robbie (Brady Allen) there.  When Robbie’s mother is suddenly taken ill to hospital Robbie stays over at Alex’s place and it is here the paranormal activity begins.  End of story.  Or end of any reasoning to the plot of the film

Found footage is the order of the day.  It does not make sense that the entire film is shot with shaky camera or grainy footage.  A few times, these footages are explained.  At the film’s start, Ben is supposed to be shooting Wyatt’s soccer game.  In another scene, Ben’s camcorder was supposed to be left on overnight capturing what happens in the girlfriend’s house and in yet another, Ben shoots again through infra red tracking dots.  But the excuses slowly become incredibly silly and after a while the directors do not attempt to explain any longer the reason the film is still shot in the way of found footage.

PARANORMAL ACTIVITY contains a few genuinely scary segments.  The best of these is the boy Wyatt disappearing under the water of his bath tub.  The camera lingers for a few minutes with a shot of the still water in the tub with the audience probably wondering if the boy has drowned.  This is a classic case in which nothing happens can be more frightening than quick edits and cheap fast shocks.

But most of the scares are done in classic form with numerous false alarms, things that go bump in the night and sudden loud noises.  The directors are also fond of placing the camera up close to the front of a character and then have something in the back suddenly pop out to scare the audience.

But the main flaw of the film is that there is hardly any story or continuity.  The film is just a bunch of scary scenes loosely joined together without any regard for narrative.  Scary though these scenes may be, the collective whole can hardly be said to constitute a proper movie.

Directed by Nick and Zack Young

Directors Nick and Zack Young are brothers who produced, restored and imagined their father William Kurulek’s 1969 film about himself and his art.  The father was diagnosed as autistic, suffered mental illness, institutionalized but did not fail to put his art on canvas.  This disturbing film shows Kurelek, the man and his art.

The title THE MAZE comes from the title of one of Kurelek’s most famous and best works.  The painting shows Kurelek’s imagination of what is contained in a man’s skull – chambers that hold contents too disturbing perhaps to be put don in this review and has to be seen to give the artist justice.  This is painted while in England as a patient in Maudsley and Netherne psychiatric hospitals.  As the film is narrated, Kurulek’s other disturbing works are also displayed on the screen.

Running at slightly over an hour, the brothers’ film cuts to the chase.  The film contains no distractions but follows the father’s life chronologically as he is institutionalized and talks to the camera of his childhood, influences and finally his adulthood.  It is a disturbing life not only to be rejected by society but being unable to function due to his mental illness.  Many of his family interviewers also lend their say making the story complete. The most intriguing fact is his getting married and bearing children.  The interview giving by his wife is undoubtedly the most moving and shows what true love and endurance are.

For those who have not heard of William Kuruleks’ works and to those familiar, this documentary will still fascinate, if not to illustrate the mysteries of the human condition.

Tickets are also available at the door (cash only, subject to availability) $15

In this whimsical and visually-stunning animated film set in pre-war Algiers, Rabbi Sfar lives a quiet life by the sea with his beautiful daughter Zlabya and her talking cat. Along with a Russian painter and a wise old Arab Sheikh, the rabbi and the mischievous pet set out on a quest into the unknown depths of Africa. Using hand-drawn animation, Sfar and co-director Antoine Delesvaux recreate the multicultural community of 1920s Algiers in vivid and loving detail.

In January 2002, Dargaud published the first volume of Joann Sfar''s graphic novel, an atypical series that drew inspiration from Voltaire, the Jewish culture of Algeria and the novelist Albert Cohen. The Rabbi''s Cat has sold over 900,000 copies, joining  Marjanne Satrapi’s Persepolis in triumphant confirmation of the new wave of French graphic novelists. A success that transcends borders: the series has been translated into fifteen languages and was especially well-received in the United States. Only logical that the film industry took a keen interest in The Rabbi''s Cat, but Joann Sfar refused all proposals to adapt his story for the big screen, until the day he considered making the film himself.