WHERE ARE THE FILMS OF NICOLAS PEREDA?

The title of this series of films by Canadian director Nicolas Pereda is best answered: at the TIFF Bell Lightbox.  TIFF presents the little seen works of Pereda, who have just become known in filmdom after his SUMMER OF GOLIATH. To be screened won the Orizzonti Prize at the Venice Film Festival.

Pereda’s films are slow paced, quite unlike the commercial films one is used to, but watching them is not without their rewards.  Pereda will be present at each showing of his film to introduce them and perhaps a Question and Answer afterwards.

Here are the capsule review for 3 of the films to be screened.

The series runs from Nov 22nd.  For the complete showtimes, please check the TIFF website at: 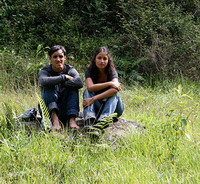 At the beginning of the film Gabino (Gabino Rodriguez) loses his dog, Juntos because he thinks his flatmate Paco (Francisco Barreiro) has left the door open.  The revisiting of the lost dog occurs at the end when Gabino and his girlfriend, Luisa (Luisa Pardo) take to the countryside.  But it is not the question whether the dog is found or not that is central to the story.  Director Pereda uses the incident to reveal the relations hips between Gabino has with both his girlfriend and Paco.  His relationship with Luisa is eroding while surprisingly, his and Paco (whom he wrestles around in one scene) seems to be all right.  The fact that the apartment’s plumbing is falling apart does not help either.  Their fridge is broken and hot water comes off from the tap though the boiler is broken.  Pereda evokes quite a bit of humour from this situation while milking more of the emotions that evoke from the incident.  Though nothing much really happens, this least seen work of Pereda’s, JUNTOS is more watchable that his other films.

Family conflicts arises when time comes up for the 2 fathers who have abandoned thier respective families to own up after the children have grown up.  Particularly disturbing is when one is asked to kneel and ask for forgiveness while those present are laughing at his embarrassment.  When the father laughs as well, those present get more upset.  Interspersed with the story is the suspicion of a 16-year old boy by the name of Goliath suspected of murdering his girlfriend.  The Pereda regualr, Gabino Rodriguez is again present playing a macho soldier roaming the Huilotepic countryside while his mother (Teresa Sanchez)is slowly unhinged by her husband who appears at hr home and refuses to leave while bragging at his past conquests over women.  The macho masculinity is both evident and ridiculed at the same time while Pereda takes his time to get his message delivered subtly on screen.

Moving at a snail’s pace, for example in the 2 minute scene with the lead character peeling an orange while waiting for the bus, director Pereda’s film is nevertheless quite watchable for the way he subtly draws his audience into his world.  The world in this case a rather passive young man (Gabino Rodriguez) travelling to Mexico City to prevent his uncle from selling off his grandmother’s land that they are living on.  He meets up with his estranged mother (Teresa Sanchez) who works for  a wealthy couple as a live in maid.  Nothing much happens and most of the problems go unsolved.  The audience soon learns that it is not the purpose of Pereda to lead his film in a narrative way common to most commercial films.  Pereda’s camera is fond of lingering on the actions of his characters just as Pereda is fond of long takes.  The study here is of the family nucleus as well as poverty in the countryside.  His characters carry on their problematic lives when the film ends still trying hard to solve their unresolved difficulties.